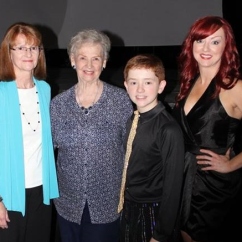 Emily is a third generation dancer, following in the footsteps of her mother and grandmother.  While her family’s dance history began in 1934, Emily’s dance training began exactly 50 years later, in 1984. 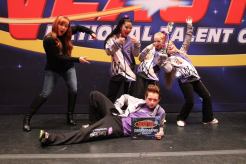 Emily continued winning awards when, in 2016, Nexstar Talent recognized her work as a choreographer, and she was given both a “Top Performance Award” and “Choreography Award” for 2 dance numbers she created.  She was recognized again in 2017 by Nexstar and given a “Top Performance Award.”  Then in 2018 Emily was recognized for a third straight consecutive year, and given a “Choreography Award.”  Also in 2018 Celebration Talent recognized Emily’s work, awarding her and her dancers with a “Judge’s Choice Award,” being selected from over 70 other numbers.

In addition to being a competitive dancer, Emily was selected to be a Georgia Dance Star and performed at the Georgia Olympic Games.

As for Emily’s teaching career, it began in 1996.  At the age of 16, her dance instructor appointed her to teach classes throughout the summer.  At the encouragement of her teacher, Emily also began choreographing musicals for her high school’s theater department and their production of “Oliver.”  Emily continued with her involvement in theater when she became involved with Rome Little Theater in 2011.  Between 2011 and 2014 Emily choreographed “Joseph and the Amazing Technicolor Dreamcoat,”  “The Sound of Music,” “Hairspray,” “Legally Blonde,” and portions of “The Rocky Horror Show.” At the 2012 RLT Gala, “The Sound of Music” was awarded to be the “Best Overall Show” of the season.  In 2013, “Hairspray” was awarded “Best Musical” as well as “Best Overall Show” of the season, and in 2014 “The Rocky Horror Show” became the highest grossing show in the history of Rome Little Theater.

In addition to working with theater productions, Emily has had the joy of working with television personalities.  In 2011 she provided back up dancers and choreographed a performance with musical group, Laughing Pizza, who could be seen regularly on GPTV.  Then in 2013, two of Emily’s dancers attended auditions for Abby Lee Miller, and were seen on the Lifetime television show “Dance Moms.”  Again, in 2016, Emily was called by producers and invited to have her dancers audition for the show

In May of 2020, Emily’s studio will celebrate their ninth annual recital.  She continues providing instruction at Dance Works of Rome in genres including hip hop, ballet, jazz, tap, modern, and lyrical.  Emily also continues to provide her dancers with the opportunity to compete, model, and audition in the dance industry.  Dance Works of Rome is Rome’s first and only competitive dance studio.

What are DWR parents saying?

“Maddie has danced for years but I saw a huge difference in her technique, skill, and knowledge after just 1 year at Dance Works of Rome!” – Laura Gann

“Best Studio in Rome by far. Owner is an amazing instructor and actually teaches. My girls became much better dancers at Dance Works of Rome.” – Rebecca Moon

“My daughter is in awe of Mrs. Emily!! She loves going to class and learning new steps and stretches and comes home and shows us what she has learned. She has a love of dance that we have not encouraged as we should have until recently and with my friends help, found Dance Works!! We are so glad we did!” – Donna Maxwell

“We love Dance Works! Miss Emily pushes my daughter to be the best dancer she can be. She has grown as a dancer and has gained sweet friendships with the other dancers.”  -Kim Wright

“My daughter, Riley, absolutely loves Dance Works and Emily! Not only has she developed excellent dancing skills, but she’s also developed a strong love for dance, and it’s all due to the strong instruction and fun at Dance Works Studio!”– Vicky Sutton